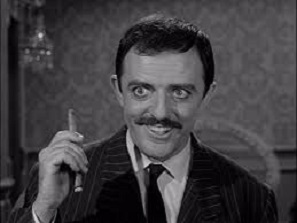 Agent 54 here again.  Sometimes I get to listen to some business being done over the phone on my watch.  Check out these two old friends Wheeling and Dealing.

Gomez Adams:  Hello Herman, is that you?

Herman Munster:  Why you old dog, Gomez Adams, how are you buddy?

Gomez:  Never better,  I just masterminded my biggest model train wreck ever.  It’ll take weeks to sift through the debris to look for survivors.

Herman:  Oh boy that sounds like so much fun.  Can I come over and help?

Gomez:  Sure, maybe sometime this weekend but, that’s not the reason I called.  Say do you still have that ole Munster Mobile of yours?

Gomez:  Ah, that’s good news and I’ll tell you why, do you remember Elvira?

Herman:  Do I! Do I!  She’s quite the cutie.  Don’t let Lilly hear me say that.  Huh huh (very large laughter)

Gomez:  Oh yes she is.  If I were not the most happily married man in the world I would be very interested in Elvira.  Did you know that she and Mortisha are the best of friends? 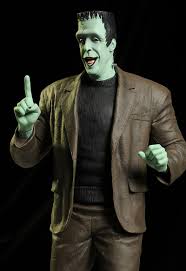 Herman:  Yes, didn’t they go to ghoul school together?

Gomez:  You are right as rain and sharp as tack my friend.  Well, that brings me to my point.  You see Elvira got a great job on a TV show in Japan however, she needs a car and your Munster Mobile would fit the role perfectly, so she knows that we are good friends and she asked me to ask you if you could part ways with the old car.

Herman:  You mean she wants to buy the Munster Mobile?  Out of the question.  That car is like part of our family.  We’ve had it for more than 50 years.

Gomez:  Of course!  I understand your attachment to the vehicle completely and I told Elvira it would take a very generous offer to even get your attention.

Herman:  A generous offer?  How, how generous?

Gomez:  Well, Elvira heard that you lost your job at the parlor last month,,,

Herman:  (interrupting)  That was not my fault!  That lady opened the wrong door and saw me waking up from my lunch time nap in one of the spare coffins.  It’s not my fault that she had a weak heart.

Gomez:  Of course not however, you are still out of work and you could use some cash to get by couldn’t you?

Herman:  And how.  How much extra cash are we talking about? 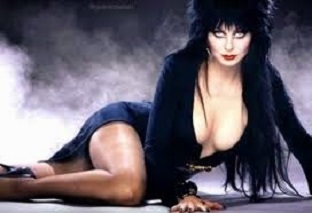 Gomez:  Enough that you could buy the family a new Cadillac Escalade and not have to worry about finding a new job for years.

Herman:  How much Gomez, in numbers?

Gomez:  Herman, Herman are you still there?

Gomez:  That’s the figure, cash on the barrelhead.  Do we have a deal?

Gomez:  Gee that’s great Herman.  I’ve got to call Elvira and give her the good news.  Say, why don’t you and your family come over for a visit next weekend.  Mortisha and I would love to have you guys and I need to catch up with Grandpa Munster.

Herman:  Sure, that sounds swell.  It’ll be a blast hanging out with Fester and the gang.  Thanks a ton for making this deal Gomez.  You really saved my bacon and thanks to Elvira too.

Gomez:  Well, what are friends for, I’ll send Lerch over with the cash to pick up the car tomorrow morning.  Via Con Dios! until next weekend.

Herman:  Buy a candee ohs to you to.  Thanks again, Good bye! 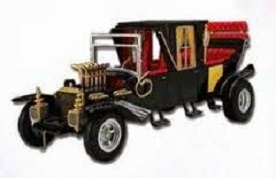 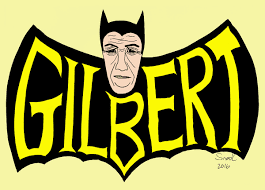