Stupid is as Stupid Does.

Today we found the Ron Burgundy Presidential Campaign in Bayou La Batre Alabama.  Ron is conducting a town hall style meeting in the old High School gym with about 40 citizens and the Burgundy campaign volunteers.  Just before Ron walked on stage, former C-BS News anchor Dan Rather stood up in the crowd and shouted “Smelly Pirate Hookers!” before stripping off his trench coat and revealing his birthday suit.  Campaign volunteers Joe and John tackled Rather and held him until security for the Bayou La Batre Psychiatric Hospital arrived to took him back to the hospital.  We pick the meeting up just at the end of Ron’s opening remarks.

Ron:  …because I was always taught that a good offense makes a strong defense and I’m for a strong National Defense.  (polite applause)

Woman in the crowd:  Ron, your hair is a work of art!

Ron:  Thank you darling,  okay now I want to open this up and hear what yall have to say so raise your hands if you have a question.  Yes, you sir with the red hat.

Campaign Volunteer, Maureen takes the microphone to Forrest Gump who still has his hand raised as high as he can.

Maureen: (quietly) Take the mic., Go ahead, take it.

Forest:  Did you read the Affordable, (looking down at notes written on his hand) Affordable Healthcare Act bill? 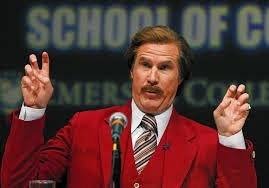 Ron:  No, my name is Ron, not Bill. (The Only Wendy Shade whispers in Ron’s ear).

Ron:  Oh, you mean the legislation known as Obamacare.

Ron:  Well, no I haven’t read it.  That bill was 2700 pages.  Nobody read it.  Not even the people who voted for it in Congress could tell you what was in it.  Even then Speaker of The House, Nancy Pelosi said “you have to pass it to find out what’s in the bill”.   That bill was unreadable.

Forrest’s hand goes straight up in the air as high as possible again even though he still has the mic. in his other hand.

Ron:  Yes Mr. Gump, you don’t have to raise your hand again.

Forrest:  Why did someone write a bill that nobody could read?

Ron:  Well, that’s a great question. Uh, I don’t know, it seems kinda stupid to me.

Forest:  Stupid is as stupid does.

Ron:  You have a point there Mr. Gump.

Forrest:  Mama said before she went to heaven that being mean to people who didn’t do nothing wrong is bad.  (applause)

Ron:  Well, having to fire 12 good hardworking people who don’t deserve it because of a bill that was supposed to make their healthcare more affordable is terribly stupid.

Forrest:  Stupid is as stupid does.  Mr. Candidate Burgundy, will this Affordable Healthcare Act bill make me do something stupid and bad?

Ron:  Uh, well, I guess it will,,,so,,,when I’m President of the United States I will repeal the Affordable Healthcare Act. (loud applause,  shouts and whistles from the crowd)  I promise to get rid of Obamacare so good people won’t lose their jobs. (louder applause)

Ron:  Say Mr. Gump, you sure do have a grasp on the issues of the day.  The Congress could use a man like you. Have you ever thought about running?

Forrest:  Oh yeah, I run all the time.  I ran here today.

Ron:  Well Ladies and Gentlemen it looks to me like we have the next Congressman from Bayou La Batre here today, Mr. Forrest Gump!  (wild applause, the crowd starts chanting “Gump, Gump Gump”) 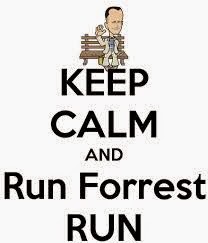