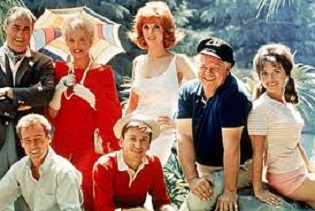 Agent 54 here again.  I really enjoy catching up on some of my old television buddies at my NSA job.  Remember Gilligan and the castaways?  Let’s see what they’re up to today.

Scene: Inside a spacious and well-appointed condo located at 1837 Sunset Blvd. Los Angeles, Ca.  There is a fully stocked bar with a bartender and there is cocktail party going on.

Thurston Howell III:  (to the bartender)  Let me have another, my good man.

Lovey Howell:  Slow down Thurston.  You know how those Bourbons effect you.

Mr. Howell:  Yes I do and that’s why I want another.

Gilligan is tapping on his Pomegranate Martini glass with a spoon.

Gilligan:  Hi everybody, I just wanted to welcome you and say thanks for coming to our One year anniversary of getting off that stupid island party. 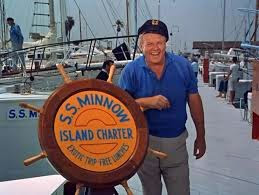 Skipper:  A toast!  To our first year of freedom, and to many more!

Everyone drinks.  Suddenly, the lights go out.  There is a hush in the room and then the flash of a lightning bolt followed by the crackle of thunder followed by the sound of a gunshot and a scream then the howl of a wolf, the sound tires squealing and a car crash, Big Ben chimes, someone bangs a gong, an owl hoots.

(Commercial break) scene:  close-up as a man appears to be riding a horse on the beach but, as the camera backs up, you see he’s really a Centaur.  Centaur:  Believe in your Smellf with Old Spice.

Scene:  When we come back to Gilligan’s condo the lights are on, there is a chalk outline of a body on the living room floor and there are two LA police officers and one police Lieutenant wearing a trench coat and smoking a cigar.

Lieutenant Columbo:  Hey, uh Ladies and Gentlemen I’m Lieutenant Columbo of the LA police Homicide department we have to ask you some questions so don’t anybody try to leave until we’re done here. 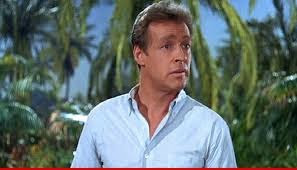 The Professor:  What kind of questions?

Ginger:  Homicide!  Oh no, not when I was just restarting my career.

Mary Ann:  Homicide?  Here?  That means there’s a murderer among us. (she and Ginger start to cry)

Lieutenant Columbo:  Now take it easy everybody, you’re in no danger now that the police are here.

Officer Murray: (calling out from the main bedroom)  Lieutenant Columbo you better come here and see this. 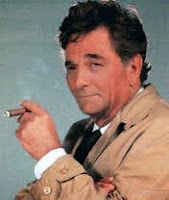 Lieutenant Columbo:  Murray, yeah, okay what the heck is all this.

Gilligan:  Hey!  Those are my underwear, get out of there.

Lieutenant Columbo:  Very interesting.  Mr. Gilligan, why do you have a drawer full of ladies underwear?

Gilligan:  I told you those are my underwear.   I started wearing them on the set when I had to dress as a woman and I liked it.  They’re comfortable and they don’t chafe me.

Lieutenant Columbo:  No, no it doesn’t.  It makes you a Weirdo!

Officer Murphy:  (calling from the computer desk in the living room) Lieutenant Columbo you better come here and see this.

Lieutenant Columbo:  Yeah, whatever.  Whatcha got? 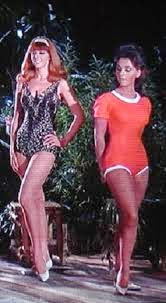 Lieutenant Columbo:  Uh, oh.  Uh, Mr. Gilligan uh, thank you for your cooperation. (to Officer Murray)  Murphy, pick up that chalk outline and let’s get our asses over to the right building.

Gilligan:  You knuckleheads are at the wrong condo!

All the party guests laugh and sigh a sigh of relief that nobody there is a murderer.

(Commercial break) scene:  A football player wearing orange number 83 is in his locker room enjoying the smell of his Old Spice deodorant but, as the camera pulls away you discover that he’s really in a snow globe on a dollar store shelf.
Whistler:  (whistles the Old Spice jingle)   A Kicker kicks a stick of deodorant through the uprights.

Scene:  Skipper and Gilligan are at the bar.

Skipper:  Well, that was a close one there, little buddy.

Gilligan:  Whatda ya mean?  You didn’t really think someone here was a killer, did you? 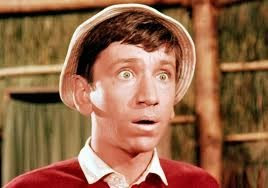 Skipper:  All I know is that after I saw all that ladies underwear, I didn’t know what to think.

Gilligan:  Gee thanks!  After I’ve been your little buddy for all these years.  Boy, a  guy tries to make himself a little more comfortable and people think he’s some kinda whacko psycho killer or something.

Suddenly, the lights go out.  There is a hush in the room and then the flash of a lightning bolt followed by the crackle of thunder followed by the sound of a gunshot and a scream….