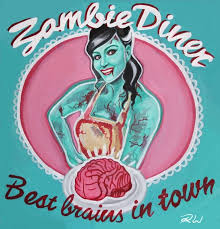 Agent 54 here again.  I don’t know why we at the NSA under the DORD have Earl’s Undead Diner, located just outside Pasadena, bugged but, what the heck, I’m getting paid to listen.  Saturday, our old zombie buddies from the movie business met there for lunch.  Here’s my report:

Scene:  Earl’s Undead Diner looks like a typical East Coast diner that has been abandoned for a couple of decades.  It’s dirty and dark and there is Spanish Moss covering much of the exterior.  Inside you can hear Rob Zombie playing on the juke box.  The smell is better than you would think.  Kind of a mixture of a nice Italian tomato sauce and rotting flesh.  There are about two dozen patrons including a few Zombies and Werewolves but, it’s too early in the day for Vampires.  Most of the crowd are regular people dressed up like Zombies or Werewolves or Vampires or Smelly Pirate Hookers.  Tis the season.

A zombie waitress who was quite good looking, when she was alive, arrives at table 4 where our three zombies, Allan, Max and Brad are seated.

Zombie Brad:  Naw, you got any of that Brainloaf that Jerry’s wife makes for ya? 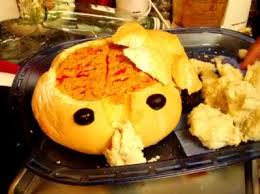 Waitress:  Yeah, she just dropped 10 more off on Thursday.   Everyone here want the loaf?

As the waitress shuffles away, Max speaks up.

Zombie Max:  Look at those posers over there.  If they only has a clue about what being a real zombie is all about.

Zombie Allan:  I hate them tourists.

Zombie Brad:  Oh com’on guys.  You know, if it weren’t for them, this place would be closed. 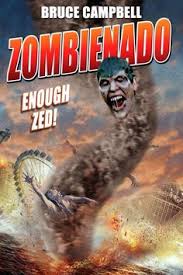 Max:  Whatever!  So, have you heard anything about work?

Brad:  I’m on it.  My buddy Ziggy is supposed to have some info for me later this week.

Allan:  What?  That ain’t much to go on.  I ain’t been paid since my second week on that Zombienado fiasco.  That was the stupidest idea ever!

Max:  Yeah, right!  Nobody got paid.  I had high hopes for that project.  I was thinking we might make 2 or 3 sequels for that piece of crap.

Brad:  Yeah, I know that Zombienado failure was a real drag.

Allan:  I’ll say.  Them Producers were a bunch of morons.  I mean, who makes a bunch a stinkin sharks the heroes of a movie?  Don’t make no damn sense.

Brad:  Hey, this is Hollywood we’re talking about.  It makes no sense that Vin Diesel has a career but, he’s rich enough to buy all three of us ten times over.

Max:  Right!  I gave up on trying to make sense.  Now I just want to make cash.

Allan:  What the hell happened to them damn Producers anyway?  We ever gonna get paid?  If we don’t get paid, they’d better throw them bums in jail.

Brad:  I heard they left town.  Skipped the country is what I was told.

Max:  You know I heard that too.  I had a fantasy where they were all fleeing to Mexico in a small motorboat that was attacked by Giant Squids and they all got ate.

Max:  You really think so?  I mean they don’t have to be Producers.  They could be Directors or Agents or Politicians or other criminals too.  You know, I could sit down and write something up for this idea.  You wanna help?

Allan:  Here you go again with your big stupid dreams.  You guys been smoking too much uh yur medical marijuana. 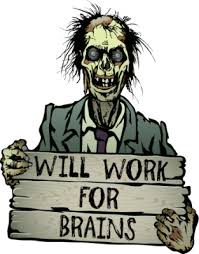 Zombies are People Too.