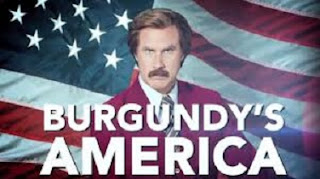 I use my NSA equipment to get the best HD looks at NASCAR.  I caught up with  the Burgundy Campaign visiting this week’s race track.

Blitzed Wolfer:  Howdy NASCAR fans, I’m Blitzed Wolfer for CAN the Cable Ass Network and I’m here in Phoenix Arizona for the CampingWorld.com 500 Race.  It's NASCAR race week at Phoenix International Raceway as we will be running hard on Sunday afternoon.  I’m here with NASCAR legend Ricky Bobby who will be driving a Dodge Charger in the race and Presidential candidate Ron Burgundy who drives a Dodge Durango.  Gentlemen, good to see you both.

Ricky Bobby:  Hey Buzzed, it’s great to be here.  I’m a getting ready to go fast.

Ricky:  Blimpezed?  Butzed, Bitzed?  What the heck?  You know it’s kinda noisy here around the track.

Ricky:  I love football.  Them Arizona Cardinals go fast like me.  Shake and Bake!

Ricky attempts to give Ron a “high five” but Ron has no idea what is going on. 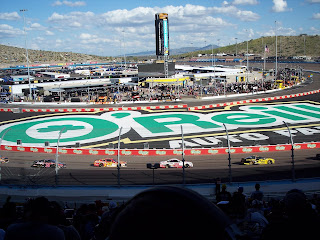 Ron:  Uh, no thank you.  You know, this is a very nice track.  I’d like to drive my
Dodge Durango around it for a few laps.

Ricky:  Yeah and the Durango is a nice truck but, this ain’t a truck track.

Blitzed:  Actually Ricky, they do race trucks at this track.

Ricky:  Get out of town!  Well, they say you learn something new every day when you stop smokin weed.

Ron:  You know, I heard that myself on the Campaign trail.

Ron:  Well, that’s sorta true in the end but, we’re in the primaries now and you can finish second or third or even fourth in some states and it’s okay, and you might not win in the primaries but, you can get picked for Vice-President.

Ron:  It’s like your Shake and Bake buddy, Cal Naughton Jr.  He helps you win and then he’s your Vice-Winner.

Blitzed:  Well, that is our political system.  You have race to see who is ahead in the polls and then you choose a Vice-President from the candidates that didn’t win.

Ron:  It is quite an honor to be picked for Vice-President.

Ricky:  Do the Vice-Presidents have to wear a big L on his jacket to let everyone know he didn’t win?

Ron:  No, Vice-Presidents dress in fine suits and have many leather-bound books.

Ricky:  So, when the President wins, he gets to be Commander in Chief.  What does the Vice-President do?

Ron:  (a little flustered) Well he, he goes to shopping malls and says stuff.

Ricky:  Oh, you mean like when I go to Food City and sign loafs of Wonderbread and ladies boobies and stuff and tell everybody how much I enjoy eating Wonderbread the bread of Champions. 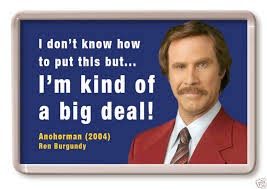 Ron:  Well, I’d like to wish you good luck in your race on Sunday.

Ricky:  Luck got nothing to do with it. I’m Ricky Bobby.  I go fast.  If you ain't first, you're last.  Uh, I want to wish you good luck in your race and I hope you don’t have to be Vice-Winner.

Blitzed:  Well, I’m sure both races will be exciting to the end. That raps it up from the CampingWorld.com 500 Race in Phoenix Arizona.  This is Blitzed Wolfer on the campaign trail for CAN. 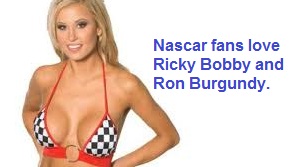