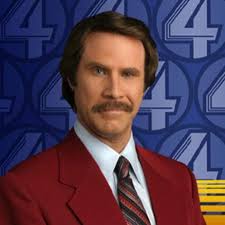 It’s been a while since we had an update from Blitzed Wolfer on the Burgundy Campaign.  Many voters seemed to have gotten the impression that Ron had dropped out of the race.  Nothing could be further from the truth.  Check out this interview with Ron from New Mexico.

Blitzed Wolfer:  Hello everyone this is Blitzed Wolfer with CAN on the campaign trail with Presidential candidate Ron Burgundy.  We’re standing in front of a medical facility in Albuquerque, New Mexico with Ron and his Physician, Dr. Vinnie Boombatz.

Blitzed:  (to Ron Burgundy)  Ron, you have an announcement for us?

Dr. Vinnie:  Hello Blitzed.  I’m here to certify that after rigorous examinations by the medical staff here at the Albuquerque Indian Health Center, we can pronounce that candidate Burgundy is healthy as a horse and his hair is a work of art.

Ron:  Thank you Dr. Vinnie.  You can go back to the golf course now.

Blitzed:  (to Ron)  That’s terrific but, tell me Ron, what about your evaporating poll numbers?  You are down to 0.0004% in the latest Hecht-Cantilever poll.

Ron:  Well, a lot of things evaporate here in the dessert.  We still have time and though I may not have a lot of support, it’s the quality of my support that counts.

Blitzed:  Uh, okay.  So, most of American voters seem to be supporting other candidates.  What do you think of your opponents supporters?

Ron:  Well, while they’re as wrong as wrong can be to support somebody else, I still find them to be “adorable”.

Blitzed:  That’s nice.  So, what’s next for your campaign? 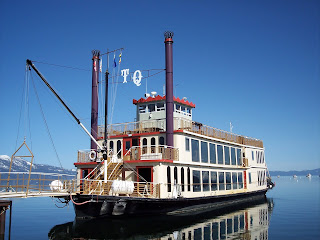 Ron:  The campaign is going to Reno Nevada to get ready for the first Presidential Debate in Lake Tahoe on September 26th.  I think we’ll do quite well there.  You’ll see.

Blitzed:  Uh, Ron, the first Presidential Debate is in New York at Hofstra University on the 26th.

Ron:  What?  Wait! Wadda ya mean?  (calling out to Campaign Manager, The Only Wendy Shade)  Wendy!  What’s he talking about?

Wendy walks up to Ron and Blitzed.

Wendy:  (sadly) Uh, I’m sorry Ron but, we still haven’t received a reply to our appeal from the debate committee.  I didn’t know how to tell you this but, we’re not invited to the big debate. 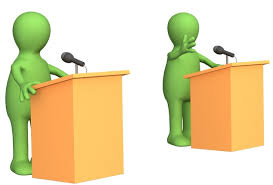 Ron:  What!?! But, I’m the best looking candidate in the race!  How can this stand?  Nevermind, I’ll hold my own debate in or at Lake Tahoe.  You’ll be there to cover it, right Blitzed?

Blitzed:  Uh, actually I have tickets to go cover the big debate.

Blitzed:  Yeah, Uh, that’s, that’s all the time we have for today.  I’m Blitzed Wolfer on the campaign trail for the Cable Ass Network.  Thanks for watching.

Ron Burgundy Leading in the Polls!