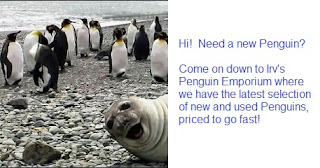 Agent 54 here again.  While I was carelessly watching Hockey or Baseball on my TV, I noticed some Shifting Alliances that made me curious.  When I brought these concerns up with my wife, she made me feel like I was the only one in the world who cared or even noticed these things.  Is that true?  Am I alone?  Do I need psychotherapy?  Let me explain before you answer these questions or before you send the guys in the white jump suits with the big butterfly nets and strait jackets again. 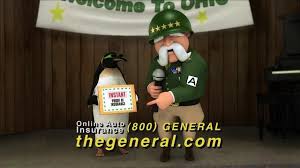 I have long thought it was very odd that The General of General Car Insurance ran around with a Penguin for a pal.  Though Penguins are an up and coming species and may someday challenge Cats for WorldDomination of this puny planet, my thoughts were “What the heck do Penguins have to do with Car Insurance”?  Penguins don’t drive.  In fact, Penguins come from the South Pole.  Most of them have never even seen a car and they certainly don’t buy Insurance.  I’m sure there are damn few of them that could even hold a job.  Why a Penguin?

The next thing you know, Shaquille O’Neal (Shaq) is riding shotgun with the General and has speaking parts in his advertisements.  It appears that The General had thrown the Penguin under the red Corvette.  I do like Shaq because he knows from funny but, he’s no Penguin and he should have had more respect than to break-up the General-Penguin team.

Before you start to cry for the Penguin, let me tell you the good news.  In the most important and accurate article The New York Times has ever published, it was announced that the Penguin had landed a new gig as Winnie the Pooh’s new buddy and had even been given a cool new name, “Winter”.  There’s no word yet about the question of is “Winter” going to get a speaking part in his new roll or if eventually Pooh-bear (he is a bear, you know) will eat the penguin (a stunt penguin, of course).  Never the less, I was happy that the Penguin landed on his happy feet and I wish him well.

However, as usual, my examination of this subject has left me with more questions than answers like:  If the 7’1” tall former NBA MVP, Shaq is mistreated by The General, will Shaq stuff him into his own helmet and punt him off the Santa Monica pier into the middle of the Pacific Ocean?  Will Winnie the Pooh’s new buddy, Winter convince the bear to become a vegetarian?  Is the New York Times good for anything other than Penguin cage liner?  And finally, does anyone other than me give a crap?

What do you think?